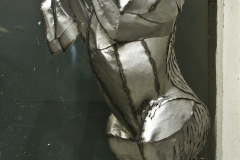 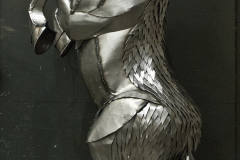 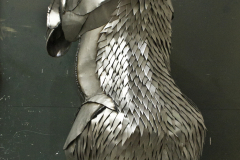 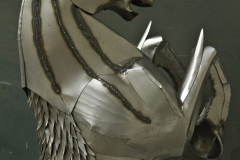 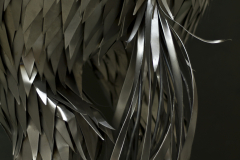 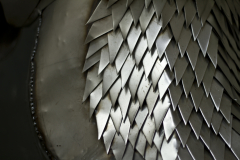 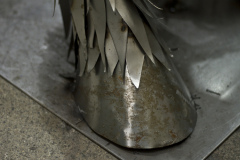 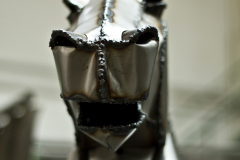 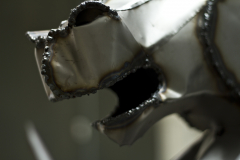 According to Greek myth Poseidon was the god of the sea, storms, earthquakes and horses. He was also the creator of the horse and was venerated as a horse. In Greek the words for „spring“ and „horse“ are related. Poseidon’s chariot was pulled by horses who were able to run on/under water. Those were the hippocampi, originally pictured as „normal“, four legged horses, later as a hybrid between a horse and a fish.

Another Greek myth tells us about the Trojan war, in which Poseidon supported the Greeks against the Trojans – Poseidon and Apollo, having offended Zeus by their rebellion in Hera’s scheme, were temporarily stripped of their divine authority and sent to serve King Laomedon of Troy. He had them build huge walls around the city and promised to reward them well, a promise he then refused to fulfill. In vengeance, before the Trojan War, Poseidon sent a sea monster to attack Troy. The monster was later killed by Heracles.
Strangely enough, the shape the Greeks chose for their subterfuge which helped them to enter Troy, was that of a horse. The legend doesn’t mention any involvement of Poseidon here, but it is an easy jump from one to the other, making him a very probable source of inspiration for the shape, and possibly for the idea which was so crucial for the win of the Greeks against the Trojans…

The Hippocampus appears once more, in a completely different form – as a major part of the human brain, which plays important roles in the consolidation of information from short-term memory to long-term memory, and in spatial memory that enables navigation. It is an essential factor in mental mapping. In Alzheimer’s disease (and other forms of dementia), the hippocampus is one of the first regions of the brain to suffer damage.
All of which, for me, makes it the patron of storytelling – without memory there will be nothing to tell. Without the mental map of connections between individual memories there will be no storyline!
And, although dreams are not a precise replay of our memories, it is thought that one potential function of dreaming could be to assist with the offline processing of our past experiences – a map-building exercise, trying out different storylines.

Back to the sculpture:
I have chosen the classical shape of a horse, the „fish“ or sea aspect of the Hippocampus is represented by the shrimp-like structure of the „armour“ on the front and by the fish-scales & algae resembling back and tail.
The resemblance to armour and to knives also refers to the story of the Trojan War.

But for me there is also another connection between the essence of a „Trojan horse“ and the processes of memorizing, mental mapping and dreaming – it refers to the vulnerability of these functions of our brains, to how susceptible they are to manipulations and how scary this is, as their role in making each of us the persons who we are is enormous.